In terms of software middleware, the Real-Time (RT) cross-robot software architecture called XBot was designed and developed. It provides to the users a software infrastructure which can be used with any robotic systems enabling a fast and seamless porting of the code from one robot to the other assuring flexibility and code re-usability. Moreover the implementation of the framework ensures easy interoperability and built-in integration with other existing software tools for robotics, such as ROS, YARP or OROCOS.

A schematic representation of the XBot software architecture with the related components overview and interaction can be found below. 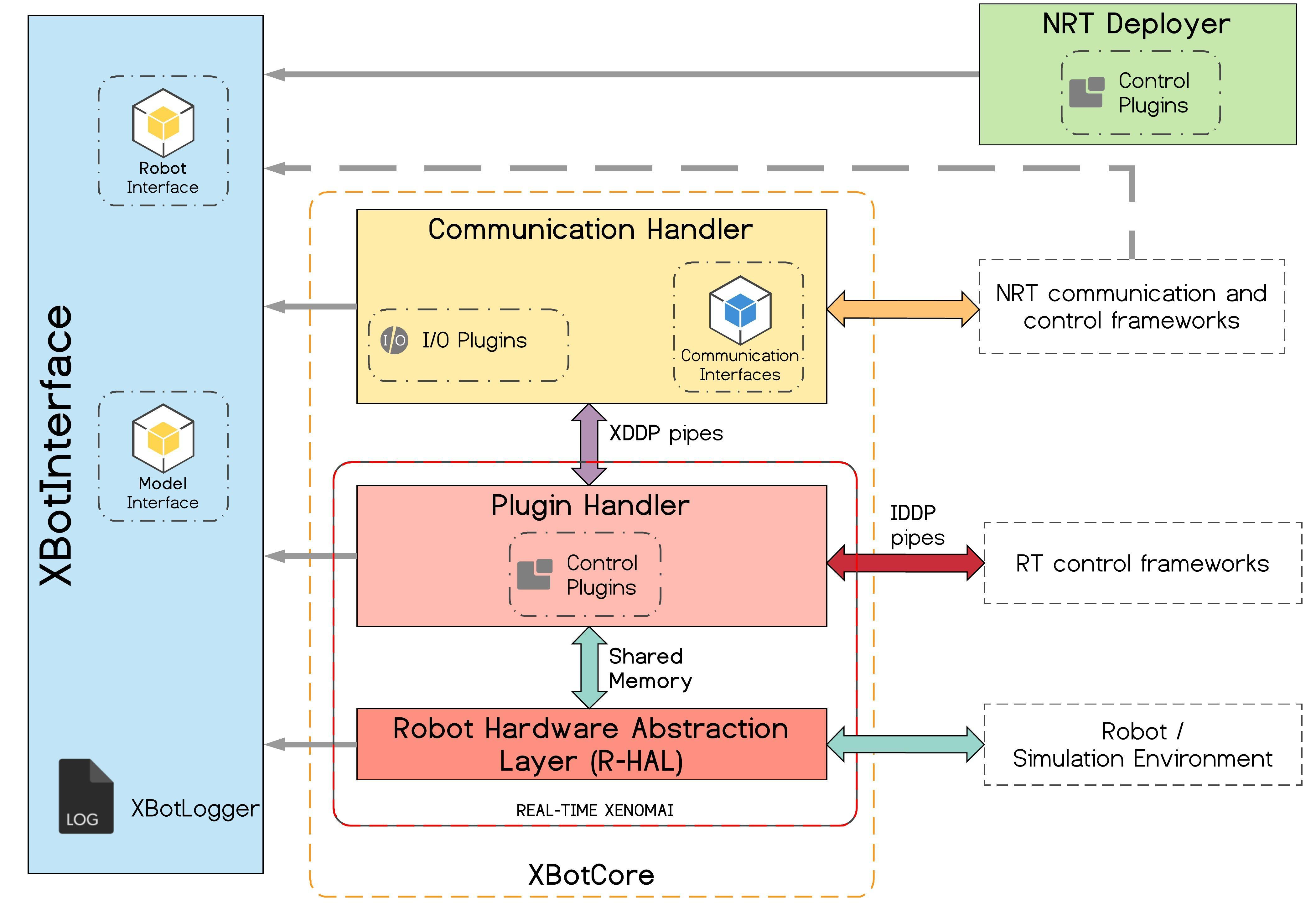 The XBot framework has been widely used and adopted in the last few years: in the following list are reported the most important projects where XBot has been employed.

- WALK-MAN project funded by the European Union Seventh Framework Pro-gram FP7-ICT 611832. The WALK-MAN humanoid robot  uses the XBot as RT software framework, with R-HAL support for EtherCAT and built-in communication interfaces towards both ROS and YARP. Moreover inside this project the XBot software platform has been identified as one of the “key innovators” by the European Commission and it has been published inside the EU Innovator Radar platform: https://www.innoradar.eu/innovation/30632

- CENTAURO project funded by the European Union’s Horizon 2020 robotics program ICT-23-2014, under Grant Agreement 644839. The CENTAURO robot (in the image below) uses XBot as a RT software framework, with R-HAL support for EtherCAT and built-in communication interfaces towards ROS, used for the vision sub-system and the non-RT control of the robot.

- CogIMon project funded by the European Union’s Horizon 2020 robotics program ICT-23-2014 , under Grant Agreement 644727. One of the results of the CogIMon project is the COMAN+ robot which uses XBot as RT software framework, with R-HAL support for EtherCAT and built-in communication interfaces towards ROS and OROCOS frameworks.

Related to the above projects HHCM had a full-day tutorial in IROS 2018 about XBot software architecture with examples shown in simulation and hands-on session on the real CENTAURO robot: https://xbotcoretutorial.weebly.com/

- PHOLUS project under the agreement of Defense Ministries of Italy and Singapore and the collaboration of A* research center. The result of the project leads IIT to build a copy of the CENTAURO robot delivered in A* (Singapore) with the software architecture handled by XBot and exploited by the A* group.

XBot is released free and its current version (xbot2) can be found here with all the related documentation:  https://advrhumanoids.github.io/xbot2_wip