Alberobotics is a Technology Transfer activity performed within in the HHCM lab. It targets to the development of reconfigurable robotics and automation systems. For more details please visit  ALBEROBOTICS.

The JOiiNT LAB is a joint laboratory resulting from the partnership with some of the main innovation players in Bergamo, a highly industrial and technological province. The JOiiNT LAB is promoted by Intellimech, a consortium of companies aiming at fostering technology transfer and creating a synergy between the world of research and industrial needs, Confindustria Bergamo, a free, non-profit association of companies that plays a representative role of the industrial and tertiary enterprises of Bergamo and its province, Kilometro Rosso Innovation District, one of the places with the highest density of innovation at European level and the University of Bergamo.

CONCERT proposes the development of a new paradigm of high power/strength, adaptable, collaborative robots, which leverages on configurable hardware with adaptive physical capabilities. Automatic deployment of control and online safety verification methods together with  mul

timodal, multistate perception and supervision tools provide enhanced human, robot and task execution awareness, enabling the implementation of adaptive shared autonomy and role allocation planning in human robot collaboration. It advances collaborative robot technologies and apply them in workspaces and tasks with highly uncertain settings, providing collaborative functionalities that are robust, safe and efficient under unstructured workspace conditions while executing a number of demanding representative tasks from the construction sector. 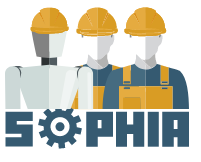 SOPHIA targets socio-physically adaptive, ergonomic, and reconfigurable production systems that are accessible and understandable by everyone. Such systems are built on the basis of human work processes backed by decision support tools, assistive and interactive robots and smart self-adapting workplace automation. It aims to create a new generation of core robotic technologies for socially cooperative human-robot systems. The objectives are to achieve a reconfigurable and resource-efficient production and improve human comfort and trust in automation, in hybrid human-plus-robot manufacturing environments.

The EUROBENCH project aims to create the first unified benchmarking framework for robotic systems in Europe. This framework will allow companies and/or researchers to test the 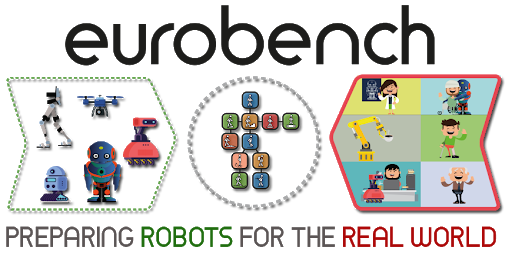 performance of their robots at any stage of development. The project is mainly focused on bipedal machines, i.e. exoskeletons, prosthetics and humanoids, but aims to be also extended to other robotic technologies. To this aim, EUROBENCH develops two BENCHMARKING FACILITIES, one for wearable robots (including exoskeletons and prostheses) and the other for legged and mobile robots, to allow companies and/or researchers to perform standardized tests on advanced robotic prototypes in a unique location, saving resources and time.

The CENTAURO project aims at development of a human-robot symbiotic system where a human operator is telepresent with its whole body in a Centaur-like robot, which is capable of robust locomotion and dexterous manipulation in the rough terrain and austere conditions

characteristic of disasters. The CENTAURO robot will consist of a four-legged basis and an anthropomorphic upper body and will be driven by lightweight, compliant actuators. It will be able to navigate in affected man-made environments, including the inside of buildings and stairs, which are cluttered with debris and partially collapsed. The Centauro system will be capable of using unmodified human tools for solving complex bimanual manipulation tasks, such as connecting a hose or opening a valve, in order to relieve the situation.

CogIMon aims to make a step in human-robot interaction toward the systemic integration of robust, dependable interaction abilities for teams of humans and compliant robots, in particular for the compliant humanoid COMAN. We focus on compliant interaction that requires m

otion and compliant behavior regulation of both the human(s) and the robot(s) and involves full-body variable impedance actuation, adaptability, prediction ability, dependability, flexibility, and enhanced motion. To achieve this ambitious goal, the project targets step-changes in key technologies and technology combinations that arise from novel scientific enabling concepts, interdisciplinary research on interacting humans, and engineering developments.

WALK-MAN aims to develop a humanoid robots that can operate in buildings that were damaged following natural and man-made disasters. The robot will demonstrate new skills including dexterous, powerful manipulation, robust balanced locomotion and physical

sturdiness. This project targets to significantly advance the current walking and locomotion capabilities of humanoid systems so that the robots will be able to walk in and through cluttered spaces (walking in a crowded environment) and maintain their balance against external disturbances, such as contact and impacts with objects or people. In parallel, WAK-MAN aims to advance the manipulation capabilities of existing humanoids by developing new hand designs that combine robustness and adaptability. This will take advantage of recent developments in mechanical design and materials that allow the creation of less fragile and delicate end-effectors that are capable of grasping/manipulating traditional hand tools.

an and robots can actively and safely share a common workspace. Inspired by these results, SAPHARI will perform a fundamental paradigm shift in robot development in the sense that it will place the human at the center of the entire design. The project will take a big step further along the human‐centered roadmap by addressing all essential aspects of safe, intuitive physical interaction between humans and complex, human‐like robotic systems in a strongly interconnected manner. While encompassing safety issues based on biomechanical analysis, human‐friendly hardware design, and interaction control strategies, the project will also develop and validate key perceptive and cognitive components that enable robots to track, understand and predict human motions in a weakly structured dynamic environment in real‐time.

ontrol and learning solutions will be integrated. With regards to the mechanical systems with passive compliance the goal is to reduce the distinction between plant and controller that is typical in traditional control engineering and to fully exploit complex body properties, to simplify perception, control and learning and to explore how compliance can be exploited for safer human robot interaction, reduced energy consumption, simplified control, and faster and more aggressive learning.

VIACTORS addresses the development and use of safe, energy-efficient and highly dynamic varia

ble impedance actuation systems which will permit the embodiment of natural characteristics found in biological systems into the structures of the new generation of mechatronic systems. The results of this project will deeply impact applications where successful task completion requires people and robots to collaborate directly in a shared workspace or robots to move autonomously and as efficiently as humans.

ROBOTCUB was a research initiative dedicated to the realization of embodied cognitive systems and the creation of an advanced robotic platform for neuroscientific study. The two main goals of this project are; the creation of an open hardware/software humanoid robotic platform (iCub) for research in embodied cognition and the advancing of our neural understanding of cognitive systems by exploiting this platform in the study of the development of cognitive capabilities in humanoid robots.