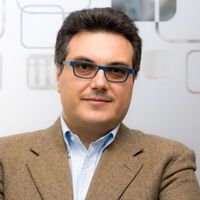 Paolo Decuzzi is a Senior Scientist and the Founding Director of the Laboratory of Nanotechnology for Precision Medicine at the Italian Institute of Technology in Genova – Italy.

Dr. Decuzzi earned his M.Sc. degree in Mechanical Engineering from the Polytechnic University of Bari (Italy) in 1997 and his Ph.D. degree in Mechanical Engineering from the University of Naples – Federico II (Italy) in 2001, with a thesis on friction and adhesion at the nanoscale. In 2002, he was nominated Assistant Professor of Machine Design at the Polytechnic University of Bari and, in 2005, he became Associate Professor in the School of Medicine of the University ‘Magna Graecia’ of Catanzaro. There, he co-founded BioNEM - the laboratory of BioNanotechnology and Engineering for Medicine - one of the first nano-engineering laboratories built in a School of Medicine, worldwide. In October 2007, he joined The University of Texas Health Science Center in Houston as an Associate Professor of Biomedical Engineering. In October 2010, he moved to the Houston Methodist Hospital where he served as a Professor of Biomedical Engineering till July 2015. There, he founded the Center for the Rational Design of Multifunctional Nanoconstructs, with the financial support of the Cancer Prevention and Research Center of Texas and the US National Cancer Institute; and served first as the co-Chair of the Nanomedicine Department and then as the interim Chair of the Translational Imaging Department. In July 2014, Dr. Decuzzi was awarded a European Research Council “Consolidator Grant” to design, synthesize and develop nanoconstructs for imaging and therapy in brain cancer. In July 2015, he joined the Italian Institute of Technology in Genova.

Dr. Decuzzi has published over 180 papers in international peer-reviewed journals, international conferences, and book chapters. He holds over 5 patents in the field of Nanomedicine. He co-founded NEMB – NanoEngineering for Medicine and Biology – committee of the American Society for Mechanical Engineers and is involved in multiple dissemination activities to foster the collaboration between biomedical scientists and engineers. He serves on multiple NIH, NSF, ESF, and Italian Government study sections and his research activity has been primarily supported by NIH, DOD, CPRIT in USA; ESF and ERC in EU. In his career, he has so far secured over 15M€ in extramural funding, half of which from European grants.

He is the President of the Controlled Release Society Italy Local Chapter since January 2020.  https://www.crsitalia.it/